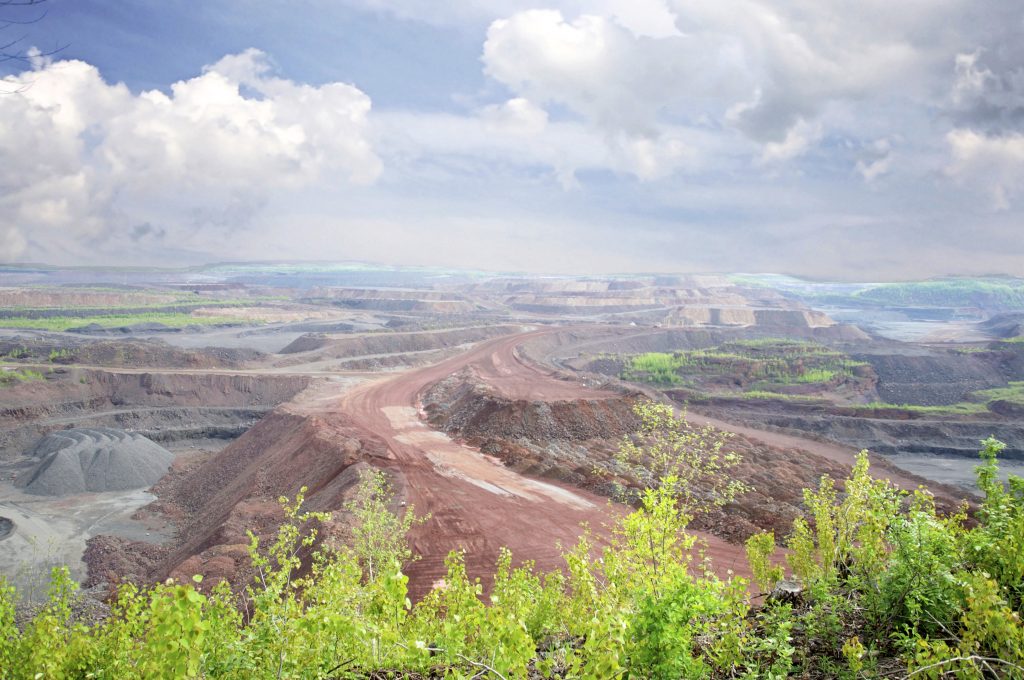 Directions to the NEW Hull Rust Mine View Location

Over 4 miles long and 1.5 miles wide, this Open Pit Iron Mine is often considered the Grand Canyon of the North!  Nestled amongst the abandoned foundations of  “The Town that Moved”, this scenic overlook is both vast and beautiful and will give you a true sense of the history of the industry and region. The mine was listed as a National Historic Landmark and added to the National Register of Historic Places on November 13, 1966. The mine is still operated today by Hibbing Taconite Company, where taconite pellets are produced. 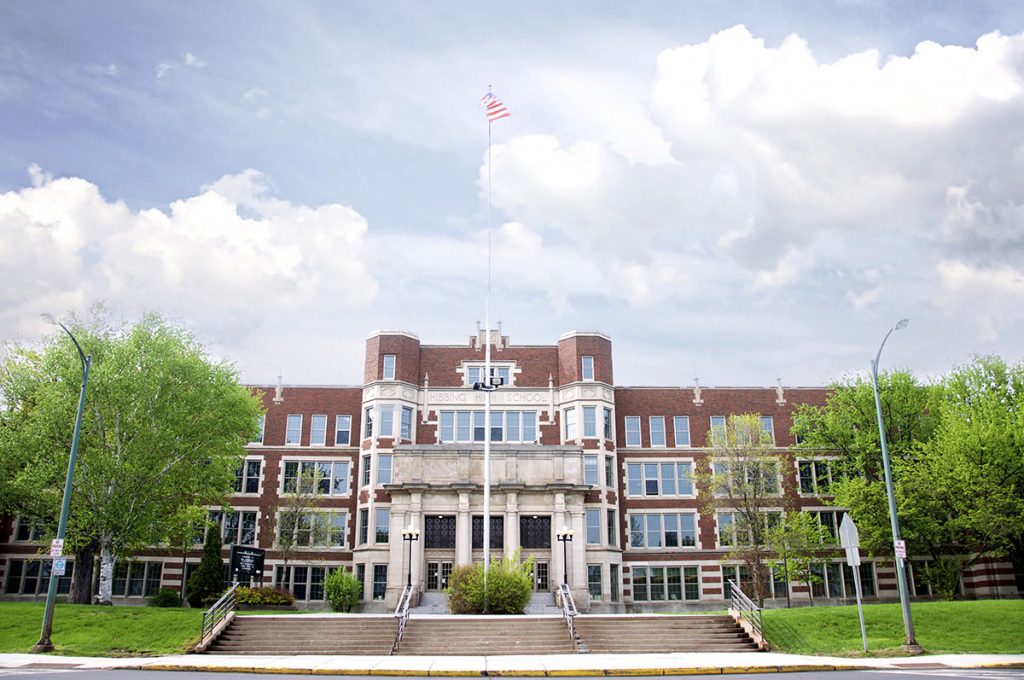 As the mines expanded, iron ore was discovered under the existing town of Hibbing. Beginning in 1918 the entire town of Hibbing was moved two miles south.  The high school was built in 1923 at a cost of $4 million, and paid for by the mining industry, which wanted to make the move more palatable for those being displaced. The school features a lavishly decorated 1800-seat auditorium patterned after the Capitol Theatre in New York City. The school is listed on the National Register of Historic Places and received the Bellamy Award in 1968, an honor given to one school nationwide annually for fine academic programs. Bob Dylan and Kevin McHale are two famous alumni of Hibbing High School.

Come learn the history of the famous bus line created right here in Hibbing! Hibbing is the birthplace of the bus industry in the United States. Visitors experience the sights and sounds of Greyhound’s fascinating past which includes seventeen historic buses.

Access the trail in North Hibbing next to the Greyhound Bus Museum. Visit www.mesabitrail.com for maps, trail updates, and wheel passes.

(This site is not publicly accessible due to mining operations.)

Though it seems an odd attraction, the Hibbing Area Chamber often gets requests for information on the Triple Divide. Up to date scientific information changes often.

According to Pete Clevenstine, Minnesota DNR Minerals Division, in a letter dated October 6, 2006 on the website http://www.nationalatlas.gov/articles/geology/a_continentalDiv.html presents some of the various opinions that define what a continental divide is reasonably well. Much of what is said below has been pulled from that website and is identified in quotation marks and italic text.

The website identifies continental divides 'using two simple, general criteria. One, a continental divide separates major streams that ultimately flow in divergent paths and will not join each other before they enter an ocean or sea. Two, a continental divide separates surface waters that ultimately flow to different oceans, different seas, or different coastlines on different sides of a continent. From these criteria, the North American continent has at least four distinct continental divides that separate drainages of the Pacific Ocean, Arctic Ocean, Hudson Bay, Gulf of St. Lawrence, Gulf of Mexico, and Atlantic Seaboard (Fig. 3).Three of these divides have pre-existing formal names: the Great Divide, the Northern Divide, and the Eastern Divide. The fourth divide is herein referred to as the St. Lawrence Seaway Divide.'

Page 2 of this document includes a map from the website used to illustrate these divides. The website also describes 'a triple point, or triple divide, as the place where two continental divides intersect and water drains into three different watersheds. Five widely-recognized triple divides exist in the United States, including: Triple Divide Peak, Montana; The Hill of Three Waters, Minnesota; Three Waters Mountain, Wyoming; an unnamed hilltop near Gold, Pennsylvania; and the unofficially named Headwaters Hill, Colorado.'

'Triple Divide Peak in Glacier National Park, Montana, marks the intersection of the Great Divide and Northern Divide. Water is diverted from Triple Divide Peak into the Pacific-bound Columbia basin, the Gulf of Mexico-bound Missouri basin, and the Hudson Bay-bound Saskatchewan and Nelson drainages.'

'Another triple point exists in northern Minnesota near Hibbing. Here the Northern Divide intersects the St. Lawrence Seaway Divide. From this point, water flows in three directions, north to Hudson Bay, south to the Gulf of Mexico, and east to the Gulf of St. Lawrence. The Chippewa Indians referred to the location as 'The Hill of Three Waters' or 'The Top of the World' and frequently held their council meetings there for tribes living within about a 100-mile radius. The site is not publicly accessible due to mining operations. Its official platting is Section 26, Township 58, Range 21.' (Hibbing Chamber of Commerce, 2001).

'Another triple point exists atop an unnamed peak near Gold, Pennsylvania, where waters separate into the Mississippi, Great Lakes, and Susquehanna drainages. Hopefully, someone will champion a fitting name for so distinguished a peak.'

These three:Triple Divide Peak, Montana; Hill of Three Waters, Minnesota; and Gold, Pennsylvania are clearly regarded triple points by most experts. Opinions are more divergent on the status of Headwater Hill, Colorado and Three Waters Mountain, Wyoming. 'Two other peaks have been suggested as triple points: Headwater hill in south-central Colorado, and Three Waters Mountain in western Wyoming. Three Waters Mountain in Wyoming is the source of the Columbia, Colorado, and Missouri-Mississippi river systems. Technically, both the Columbia and Colorado rivers flow into the Pacific Ocean, although the Colorado River empties into the Sea of Cortez before its waters co-mingle with those of the Pacific Ocean. From Headwater Hill, water diverges into the Colorado River, the Rio Grande drainage, and the Arkansas-Mississippi drainage. However, both the Rio Grande and Arkansas drain into the Gulf of Mexico, making the case for triple-point status of Headwater Hill somewhat less certain than the other four triple points. By the definition I have adopted herein, the Sea of Cortez and the mouth of the Columbia River would be distinct coastlines, and the Three Water Mountain would qualify as a triple point. In contrast, the mouths of the Rio Grande and Mississippi River share the same coastline - the Gulf of Mexico. Therefore, the status of Headwater Hill, as a triple divide, is more dubious than that of the other four triple-points.'

Minnesota Discovery Center is comprised of a museum, research center, and park. It tells the story of the Iron Range - its people and its culture though exhibits, interpretation, programming and research materials. The center highlights the story of the predominantly European immigrants who migrated to this region at the turn of the 20th century to find work in the burgeoning iron ore industry.